Humor for my Navy and Marine friends

This SI was at OCS when DS attended. He’s not Smith or any other candidate in the photo.

More Navy and Marine humor.
The Marine cartoon reminds me of when my senior enlisted leader would poke his or her head in the door and start out with “uh... ma’am?” Those were never good.

Not so much a meme as a story:

I have a friend who's whole family is marines, I've gone to school with half of the family (they're quite large), and one of them was also a really great goalie for our school soccer team. After he graduated his brother started attending and he told me a story about his brother that I find quite ironic. Everyone knows the joke that Marines eat crayons and whatnot, but apparently at a party at their house, the older brother who used to be a goalie was drunk. Really drunk, and hungry, and someone had just given him a box of crayons as a goodhearted joke earlier that week. The crayons were lying in front of him, and... being drunk.... you guessed it, he ate them. He ate every d*mn crayon in the box, he kept eating them even after he puked the first half of the box up.

He's a great guy, but needless to say, he's not the brightest crayon in the box... I have not yet decided if he is in said box, or just rolling around on the counter.

t.reohr said:
he puked the first half of the box
Click to expand...

Did anyone get a picture? I wonder what color THAT was!
T

t.reohr said:
he puked the first half of the box
Click to expand...

Did anyone get a picture? I wonder what color THAT was!
Click to expand...

I doubt it, most of them were drunk out of their minds, but it's possible... If so I haven't seen it

A bus-driver friend of mine sent me this.

One of my favorites:

Military translation of "Secure the building"

The NAVY would turn out the lights and lock the doors.

The ARMY would surround the building with defensive fortifications, tanks and concertina wire.

The MARINE CORPS would assault the building, using overlapping fields of fire from all appropriate points on the perimeter.

The AIR FORCE would take out a three-year lease with an option to buy the building.

@ProudDad2022 I was once with the Marines'Chemical Biological Incident Response Force and one of the instructors at the medical management of chemical casualties course told the following joke (paraphrased):

The Pentagon asked all the branches: Other than personnel, what are your priorities for defending against chemical weapons?

Army: We want to prevent the damage to our tanks and artillery pieces.

Navy: We of course want to prevent agents that might cause our ships to rust.

Marines: Since we get nothing but hand-me-downs from the Army, we want to prevent further damage to our tents.

Air Force: We obviously want to fight against chemicals that kill the grass on our five star golf courses. 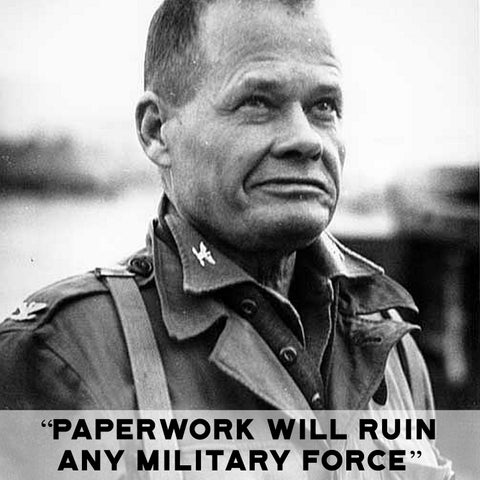 A great quote from Chesty Puller
Chesty’s “filing system” supposedly consisted of one pocket on his field jacket for incoming messages and one pocket for outgoing messages.
Click to expand...

Yeah, well, Chesty might have been a good combat officer but I'm glad he wasn't in charge of pay or allotments.

I haven't posted in awhile and figured this was a good reason to come in from the cold.

Very nice! The crayons are a hoot.

Devil Doc said:
I haven't posted in awhile and figured this was a good reason to come in from the cold.
Click to expand...

Especially appropriate given your location. Did you get many trick or treaters dressed as Marines?

I texted it to all of our USNA Marine alumni sponsor sons and daughters. Lots of [emoji23][emoji23]

kinnem said:
Especially appropriate given your location. Did you get many trick or treaters dressed as Marines?
Click to expand...

No. We got the usual princesses and super heroes. A big storm hit about 2100 which shut down trick or treating.

Some good ones, including “Classic Broadside,” in my email today.

Why everyone’s favorite photo of the Pentagon is the pic of the building in the rear view mirror.

Funny play on words using DEP. Meanwhile, inside the room, the CO would be reviewing the case with command legal, checking signals with the COC, taking the CMC’s input, then everyone got their game faces on and the CO would nod to the master at arms at the door.

USNA adjudications are run somewhat similarly. As my fellow BattOs and I used to say, mids used the same excuses with much better vocabulary and grammar.

I have a dear friend I coached high school baseball with and was one of my son’s recommendation letter writers. He’s an Annapolis grad, commanded two ships, and is just a gem of a man. Before he started teaching and coaching, he worked for a contractor and ended up back at the five sided building from where he retired. Soon after starting, he had to help move newly purchased furniture to the office spaces. He told me he worked harder at trying to not be seen by somebody he knew than he did moving furniture.

New story. I had a CO on my third ship who had me attend all Masts. He wanted me to revive them after he scared them to the point of passing out. Nobody ever hit the deck but he was scary for sure.
You must log in or register to reply here.
Share:
Reddit Pinterest Tumblr WhatsApp Email Link
Top