Your Favorite Cookbook and Why

Hugh Fearnley Whittingstall ‘River Cottage Meat Book’ - cook book and way of life book. A great read that has the bonus of recipes.

I am enjoying these posts. I believe I inherited most of my cookbooks or were given them, and bought some prior to Internet, with a few exceptions. There is so much out there on various sites, and my go-to’s seem to be Food Network and Epicurious.

If I want to try something for the first time, or haven’t liked the version I’ve made, I go find the Alton Brown version, because he tells me why the beans were tough in something with a STEM basis and how to fix it. He’s also pretty funny on Twitter.

I have a few. That I don’t use anymore. As I know the basics of the few tried and trues that I tend to use over and over. HOWEVER, I couldn’t part with them. Too many memories. We are so emotionally connected to food! My recipes on cards, in my great grandmas handwriting, in a recipe book falling apart (literally), I could never part with. Even though many of them I no longer make.

That “round bone roast marinade” one? Havent made it in 30 years. But every time I flip past it. I’m taken back to my teens, swimming at my grandparents house with my grandpa sitting around his Weber grill, tending to the marinated round bone roast. Drinking whisky, smoking cigarettes in a white T-shirt and swim trunks. Watching us swim. Happy and joyful.

My mom gave this to my wife early in our marriage. It's still on the shelf of her favorite cookbooks but it now has no front or back cover. DW has since bought Calling All Cooks book two and I just discovered books three and four are out. 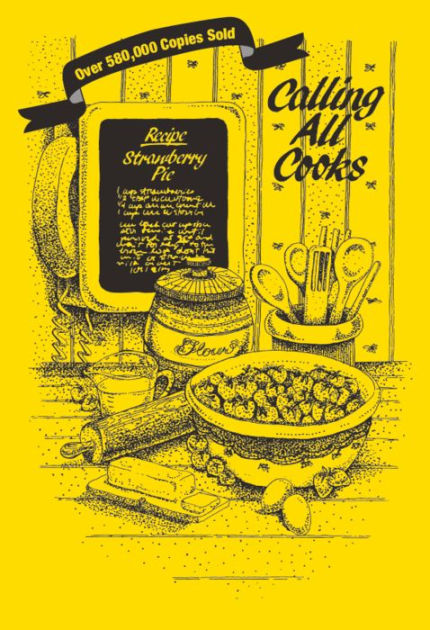 First published in 1982, this cookbook continues to be in demand. First in the series of four and over 530,000 sold it contains recipes handed down from generation to generation through family and friends. Whether a novice or an expert no cook's kitchen should be without it.

Julia Child's prior career was in the OSS.

In the past I have mentioned that my mother taught me to cook. She's got such a library of cookbooks that when they re-did the kitchen ten years ago she had bookshelves put in at one end. What I learned from her is what others above have already said: start with a solid recipe and go make it your own with what's actually in your kitchen and some fundamentals of food science so you don't wreck things.

That said, there are a handful of cookbooks I jump off from most often:

The Joy of Cooking has everything, and the reference in back covers useful things like what star anise is. That role has been supplanted by the internet, but go look up the decadent Macaroni and Cheese recipe that pre-date Netscape and tell me who taught who.

The James Beard Cookbook is an older hardback that includes laughably few ingredients in the recipes but explains why you need these and the rules for working with them. You don't get x minutes at y degrees so much as a quick rule to estimate how long it might take and how to tell when it's done. You learn a lot when the details are stripped away.

Better Homes New Cook Book is the old 60s three ring binder with the red and white checks that everyone has or has seen. Building block staples like pancakes and breads and pot pies that do not change.

I like The Complete America's Test Kitchen Show Cookbook because of how much effort they put into testing various techniques and reimagining recipes to get close to the traditional result via other paths that save time or effort. It makes me think more than most other books.

I like Mark Bittman because he gives you a recipe and then sticks in a half dozen short variations to send you off in new directions. The Weber book has a wealth of info on the grill. My wife ran a CSA drop site at our home a a number of years so we have a pile of vegetarian books, but those aren't as helpful as you might imagine. The trouble with CSA boxes isn't that you need to find a variety of recipes for a variety of foods, it's that every year it seems that you're going to get waaaayyy more of one thing for an entire summer because that's what worked that summer and here's your third week of plentiful daikon radishes. There aren't enough cookbooks on earth to get rid of six or eight monster radishes every week.

Don’t forget Alexa, and the Echo Show with a video instruction!

I doubt the next generation will even have cookbooks

StPaulDad said:
The James Beard Cookbook is an older hardback that includes laughably few ingredients in the recipes but explains why you need these and the rules for working with them. You don't get x minutes at y degrees so much as a quick rule to estimate how long it might take and how to tell when it's done. You learn a lot when the details are stripped away.
Click to expand...

@StPaulDad I have this as well & totally agree.
S

A1Janitor said:
I still look at my Betty Crocker cookbook ... and an Italian cookbook occasionally.

But @NavyHoops is right. Google. Food Network, Allrecipes, and other places - Easy to find good recipes. And easy to carry with you in supermarket.
Click to expand...

Fresh out of college and tired of eating frozen pizza and soup, I spent an hour browsing cookbooks in a local bookstore. I knew nothing about real cooking, chefs, or what made a good cookbook, but totally at random I happened across Cuisine Rapide by Pierre Franey and Bryan Miller- it had a number of recipes that appealed to me, so I bought it. It has been one of my go-to cookbooks for 3 decades now. Turns out the book is now regarded as a classic. Simple and tasty French cooking recipes. Grilled tuna, shrimp with peppercorns, egg noodles with carrots and lemon....
However, I do skip the recipes involving anchovies.

The 1979 edition of Betty Crocker. My first cookbook and great go-to for basics, especially old-fashioned desserts. I gave one to each of my
DDs when they went out on their own.

My DH's go-to is the Joy of Cooking. He also gave one to each of our DDs at the same time.