The military is not a social experiment...

Seems like a lot of hooey over a parade and a dining hall experience.

The Academy is overdue for a new Supt. as it's normally a 2 year assignment, (No disrespect meant for the current one who, I believe is coming up on 4 years.)

Actually, if you look at history of USAFA Superintendents, the last 2 or 3 were there for 4 years. Two year assignments were less common than 3 - 4 year ones, there have even been 5 year terms

This same author wrote a previous article that he references...many of his "facts" were discredited by current Cadets and alumni.

The military is not a social experiment...
Click to expand...

Lest we forget, the military is bound by the whims of civilian leadership, which over the past several years has been pushing the social experiment. Truly hoping Gen Mattis can and will correct this.
S

I'm not sure what was more depressing, the article or the comments that followed it.

Personal attacks are not allowed on this forum.

swatdude said:
I'm not sure what was more depressing, the article or the comments that followed it.
Click to expand...

Swatdude I'm sure you are an Obama loving social justice warrior. It scares me that you think this is acceptable at a military academy.
S

woodlax81 said:
Swatdude I'm sure you are an Obama loving social justice warrior. It scares me that you think this is acceptable at a military academy.
Click to expand...

Wood, I sometimes miss sarcasm, please tell me that you are being sarcastic in your response to me. I need my mind put at ease.

I'm pretty sure his description of the photo is inaccurate. That looks like the walk leading to the parade...
To go off about combat effectiveness from this is silly.
A

I was in AF Basic Training in the early 90's and I still remember the basics of marching...head straight ahead, stay with the cadence of left right left and arms at 6 (inches) t0 the front 3 to the rear.

General Patton said, "You're always on parade"...and for good reason.

Here's a related thread and the correct article link is below.
https://www.serviceacademyforums.com/index.php?threads/article-the-united-states-air-force-academy-doesn’t-train-warriors-anymore.53321/
http://opslens.com/2017/02/23/usafa-training-pc-culture-obama-administration/

My DS had his JROTC Military Ball last night. When we went to pick him up 4+ hours after start time, we asked him what time and where his location was. He said give me about 5 minutes so I could get my cadets out then I'll let you know where I'll be. I said to myself, that's a good leadership trait.

Have your DS/DD read these articles before you send them off to the Academy.
N

raimius said:
I'm pretty sure his description of the photo is inaccurate. That looks like the walk leading to the parade...
To go off about combat effectiveness from this is silly.
Click to expand...

I was thinking the same thing. If this is the route step as they get to the kick off point who cares. He referenced a photo that was during eyes right which obviously is during the key moment of the inauguration when you are front and center. So the picture and his description don't match. I would like to see that picture just out of curiousity. Sort of like when everyone freaked out about the West Point graduation photo... of them route stepping (which is a mass gaggle for anyone that hasn't done this).

Swatdude, was trying to figure out the same thing when I read that.
Last edited: Mar 19, 2017
F 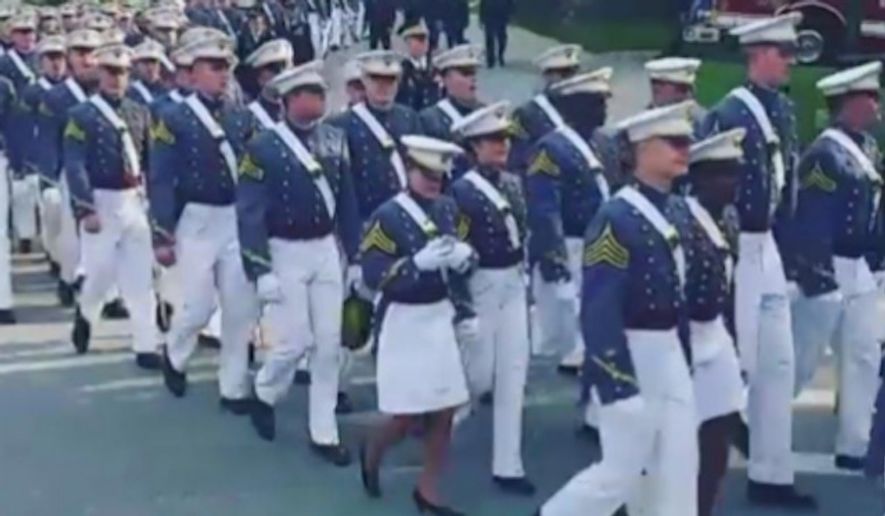 This was a route step March, you do not have to be in step together. But what do I know, I was a Navy Corpsman who served half his career with the Marine Corps.
B

This is the USAFA forum, and my kid is at USMA, so I want to suggest this as carefully as possible, but USAFA has had a reputation among the big three academies as being the most "casual", for lack of a better term. We know someone whose child is in second year at USAFA, and describe the experience there as quite different than our son's at WP. Having said that, I think all of the academies are far less rigid and "hoo-ha" than they used to be, and old grads would point to many instances of soft discipline, and clear examples of the consequences; poor form during marches being one. I have said to my son a few times that his life would be much different if he attended West Point in the 40's or 50's, than what he is experiencing now. He agrees. He gets upset when "slackers and whiners" get passed through, and don't get called out.

At the risk of sounding real bad for saying this, I do think West Point is at least a bit more serious about discipline than the others, and when we watched the March-on before the Army Navy game in December, the distinction between the form of the USMA Cadets and the "wavy Navy " was more than just obvious. Having said that, there is no shortage of areas for improvement at each of the schools.

My son really enjoyed talking to the exchange students from each of the academies who were at West Point last semester. To the man/woman the all acknowledged that WP was far more hard core in terms of military discipline and training. My son's squad leader was actually a USNA midshipman, and was pretty squared away, but he described the distinction between USMA and USNA by saying USMA was "legit". My point is that all of the academies, in order to best train our young officers to be, need to be very "legit". I like the Napoleon quote at the beginning of the article. Winning wars begins with singing a boot. The details matter, and no one should graduate any of these US military academies without knowing that, and understanding exactly why Napoleon made that statement.

I won't claim USAFA is perfect by any means. There are concerns I have, but they are not based on parade or lunch etiquette.
B

raimius said:
I won't claim USAFA is perfect by any means. There are concerns I have, but they are not based on parade or lunch etiquette.
Click to expand...

Nothing is based on one thing or another, but certain things are a manifestation of good or bad practices. I am sure there are a lot more things USAFA and the academies in general are doing good than bad, but to suggest the seemingly small things like crisp lines while marching, or uniforms being worn properly, are unimportant in the military is, respectfully, short sighted. It is, quite frankly, one important thing which distinguishes the academies from other conventional schools.
S

woodlax81 said:
Swatdude I'm sure you are an Obama loving social justice warrior. It scares me that you think this is acceptable at a military academy.
Click to expand...

Wood, are you going to explain this comment? You made a very insulting remark and I think it deserves an explanation.

swatdude said:
I'm not sure what was more depressing, the article or the comments that followed it.
Click to expand...

Swat, I misinterpreted your comment and was trying to be sarcastic. No hard feelings.